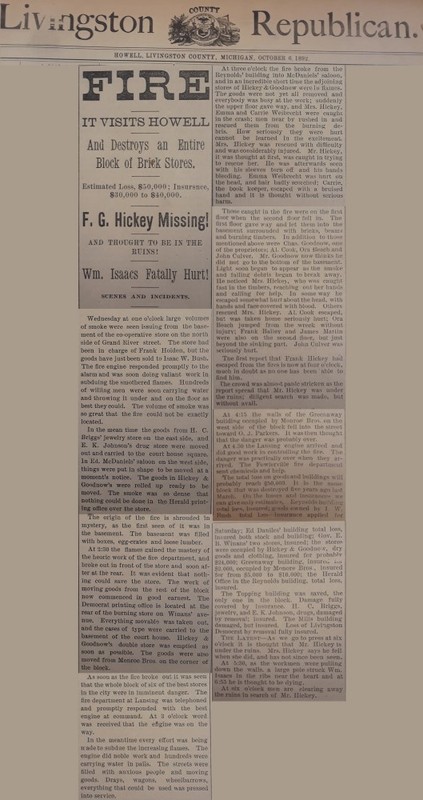 Wednesday at one o'clock large volumes of smoke were seen issuing from the basement of the co-operative store on the north side of Grand River street. The store had been in charg e of Frank Holden, but the goods have just been sold to Isaac W. Bush. The fire engine responded promptly to the alarm and was soon doing valiant work in subduing the smothered flames . Hundreds of willing men were soon carrying water and throwing it under and on the floor as best they could. The volume of smoke was so great that the fire could not be exactly located.

In the mean time the goods from H. C. Briggs' jewelry store on the east side, and F. K. Johnson 's drug store were moved out and carried to the courthouse square . In Ed McDaniel's saloon on the west side, things were put in shape to be moved at a moment's notice. The goods in Hickey & Goodnow's were rolled up ready to be moved. The smoke was so dense that nothing could be done in the Herald printing office over the store.

The origin of the fire is shrouded in mystery , as the first seen of it was in the basement. The basement was filled with boxes, egg-crates and loose lumber.

At 2: 30 the flames gained the mastery of the heroic work of the fire department , and broke out in front of the store and soon after at the rear . It was evident that nothing could save the store . The work of moving goods from the rest of the block now commenced in good earnest. The Democrat printing office is located at the rear of the burning store on Winans' avenue . Everything movable was taken out and the cases of type were carried to the basement of the courthouse . Hickey & Goodnow's double store was emptied as soon as possible . The goods were also moved from Monroe Bros. on the corner of the block.

As soon as the fire broke out it was seen that the whole block of six of the best stores in the city were in imminent danger . The fire department at Lansing was telephoned and promptly responded with the best engine at close hand. At 3 o'clock word was received that the engine was on the way.

In the meantime every effort was being made to subdue the increasing flames. The engine did noble work and hundreds were carrying water in pails . The streets were filled with anxious people and moving goods. Drays, wagons, wheelbarrows, everything that could be used was pressed into service.

At three o'clock the fire broke from the Reynolds ' building into McDaniels ' saloon, and in an incredible short time the adjoining stores of Hickey & Goodnow were in flames. The goods were not yet all removed and everybody was busy at the work ; suddenly the upper floor gave way, and Mrs. Hickey, Emma and Carrie Weibrecht were caught in the crash ; men near by rushed in and rescued them from the burning debris. How seriously they were hurt cannot be learned in the excitement. Mrs . Hickey was rescued with difficulty and was considerably injured. Mr. Hickey, it was thought at first, was caught in trying to rescue her. He was afterwards seen with his sleeves torn off and his hands bleeding . Emma Weibrecht was hurt on the head, and hair, badly scorched . Carrie, the bookkeeper , escaped with a bruised hand and it is thought without serious harm.

Those caught in the fire were on the first floor when the second floor fell in. The first floor gave way and let them into the basement surrounded with bricks , beams and burning timbers. In addition to those mentioned above were Chas. Goodnow, one of the proprietors ; Al Cook, Ora Beach and John Culver. Mr. Goodnow now thinks he did not go to the bottom of the basement. Light soon began to appear as the smoke and falling debris began to break away . He noticed Mrs. Hickey, who was caught fast in the timbers, reaching out her hands and calling for help. In some way he escaped somewhat hurt about the head , with hands and face covered with blood. Others rescued Mrs . Hickey. Al Cook escaped , but was taken home seriously hurt ; Ora Beach jumped from the wreck without injury ; Frank Bailey and James Martin were also on the second floor, but just beyond the sinking part. John Culver was seriously hurt.

The first report that Frank Hickey had escaped from the fires is now at four o'clock, much in doubt as no one has been able to find him.

The crowd was almost panic stricken as the report spread that Mr. Hickey was under the ruins ; diligent search was made , but without avail.

At 4:15 the walls of the Greenaway building occupied by Monroe Bros. on the west side of the block fell into the street toward 0. J . Parkers . It was then thought that the danger was probably over.

At 4: 30 the Lansing engine arrived and did good work in controlling the fire. The danger was practically over when they arrived . The Fowlerville fire department sent chemicals and help.

The Topping building was saved, the only one in the block.  Damage fully covered by insurance. H.C. Briggs, jewelry, and E.K. Johnson, drugs, damaged by removal; insured. Loss of Livingston Democrat by removal fully insured.

The Latest- As we go to press at six o'clock it is thought that Mr. Hickey is under the ruins.  Mrs. Hickey says he fell when she did, and has not since been seen.

At 5:30, as the workmen were pulling down the walls, a large pole struck Wm. Isaacs in the ribs near the heart and at 6:55 he is thought to be dying.

At six o'clock men are clearing away te ruins in search of Mr. Hickey.